Proofreading by English native speakers from the most beautiful city of England!

As this month we promote European relations with Great Britain (remember about our September promotion ? 10% discount for proofreading services by English native speakers), we would like to say a bit more about the city from which eCORRECTOR manages its proofreaders and translators. We are talking about York, the headquarter city of the British branch of our company.

York is the most beautiful city in Great Britain!

This statement is repeated year after year in numerous surveys: http://www.dailymail.co.uk/travel/

York gives you the fastest Internet in whole UK!

York is even called ?the digital infrastructure capital of the UK? as the city has a fibre optic network with 1 gigabyte speed (1,000 Mbps)! A good internet connection is of utmost importance to eCORRECTOR as the company serves clients via Internet ? so the faster, the better. Try to beat that! 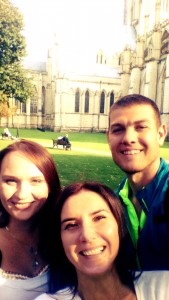 Mark, Dorota and Magda in front of York Minster

University of York ranks in the top 100 universities in the world! http://www.topuniversities.com/university-rankings/

Thanks to the proximity of this renowned University, eCORRECTOR has direct contact to a number of successful scientists and language specialist ? we specialise is professional proofreading of scientific papers by PhD native speakers.

Our Head of Scientific Proofreading, Mark J Hunt, PhD, carries out research at the Department of Biology at this University.

It is also where Magda Ochmanska, our Translations Quality Control Manager, is carrying out her doctoral research.

It all started in the antiquity ? the Romans first came to York in 71 AD and called it Eboracum. Vikings settled here in 866 and named it Jorvik. When the English regained control, they called the city York. Whether you call it Eboracum, Jorvik or York, you can be sure of one thing ?  its tradition (and blood) encompasses many cultures and languages. We simply love it!

We invite you to explore our site and contact us for further information about the language services we provide, such as professional translations and proofreading by native speakers. Don?t forget about our promotion, it lasts until the end of September!